Most of this is work was exhibited at the William Busta Gallery in Cleveland, Ohio January 4- February 9, 2013. It is all made from hand cut paper and Tyvek. Roots and Shadows: The Outlines of Change

Outlines and shadows constitute the drama of form, speaking of the limits of things at their simplest and sharpest, and of the dense mystery of substance. Silhouettes, like the cut-out paper or Black Tyvek ® landscape elements that make up Julie Friedman’s compositions, are a coded version of the houses, trees, wires, and other objects they represent. Yet, although they’re used descriptively, somewhat in the manner of simple drawings, they also have a presence and reality of their own, tautly stretched in mid-air like a spider web. Even as we look at Friedman’s surfaces, which in this show are most often black, our gaze doesn’t so much spread out to the edges of the work, but soaks in, and also glances past, around and behind the object, as with sculptural forms. That her depictions are of a double nature is one major source of their fascination. The eye can never actually perceive what the mind conceives based on these outlines, but memory in all its suggestibility and emotional complexity is awakened. Such perceptual/ cognitive expressive harmonics are part of what has interested a number of contemporary artists (Kara Walker, most famously) in paper cut-out techniques, along with the sense of history and identity they carry, relating on many levels to crafts and folk art, and to suppressed expressions of race and gender. Friedman’s art also emphasizes a fractured-looking tendency of this method, evoking anxieties inspired by sudden change, as if her excised lines were in fact cracks in the fabric of reality.

Friedman describes her Eutopia, which was created recently for the Grand Rapids, Michigan international competition “Artprize,” as a garden with magical elements. The largest of her compositions to date, it may be the most profoundly poetic. As a vision of nature’s fecundity, it’s also just a little frightening. Friedman has produced many smaller works, as well as at least fourteen large cut-outs exhibited last year at the Cultural Arts Center in Columbus, OH, that reproduce the intricacy of plant structures. She revels in the subtle illogic of visible and invisible systems that support and nourish the natural world. This is a subject that cut silhouette methods conjure well, speaking of unseen presence, and of matters that thrive in darkness. Further, Friedman capitalizes on gallery lighting, letting the shadows cast by her works add a layer of incident to her often abstract-seeming tangles of line and shadow. But in Eutopia Friedman multiplies and complicates these interests, making bogglingly complex shapes that spread like the tendrils of an ink blot not only beyond the edges of a triptych-trellis frame that supports her imagery here, but up to the ceiling, where a flight of black butterflies seems to beat against the wall, and coiling down onto the floor. Eutopia threatens to invade, rather than merely occupy the gallery space, in a dark celebration that weds randomness to the hard concentration demanded by Friedman’s method.

A new suite of medium-sized works shows a world in turmoil, upended by sketchy tornadoes that scribble through small town streets, shattering fragile human accommodations. The life we know can disappear in an instant, claimed by forces beyond our ken or control. Revelation, also, lurks at the edges of natural catastrophe like an electrical charge. Friedman expresses this most eloquently when she shows a bungalow-like house, tilted and suspended on the ramifications of a gigantically burgeoning root structure. There is no telling whether the house is being shattered by outside forces, or has strangely grown these tentacles to feed and connect it to the earth – seen here as if in an X-ray of spirit. Fairy tales and dreams fold their half-remembered illogic into Friedman’s vision, deeply rooted as it is in the rich soil of the mind. 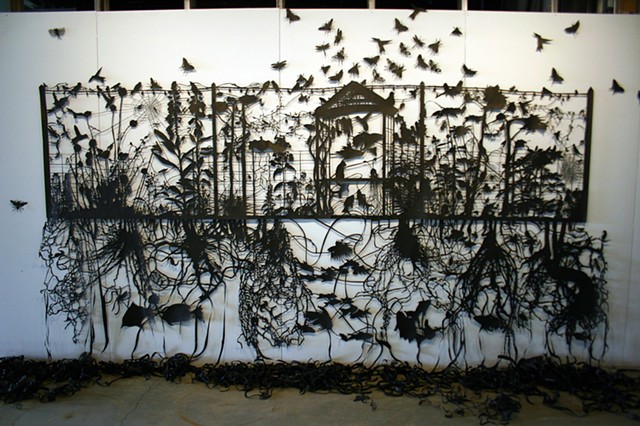